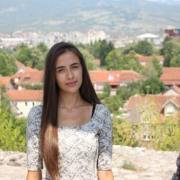 I was greeted again by a mix of day D, just as befits it. I was overwhelmed by the crowds and city transports where I can find not only mirror of my town, but of most cities that have a common “future“.

I tried to keep for one girl who was in a row because all places in bus were fulled, but she slipped her hand away and shook her shoulder, as if I were a mangy creature. I thought about it, even an itchy man has a right to stand shoulder to shoulder with every man in this world. I am just attending of one more meaning of his name (world). ALL.

Lower limit does not exist, but upper limit is increasing every day in using mobile phones. That device has fallen into oblivion, so now the cure are tablets, not pills.

Who would understand me? They are twins, they have the same phones, but they can not stand each other because they have different phonecases. Parents are fighting even about bigger nonsense. Someone has commented photo, of his wife,  he does not want to stay indebted, so he is just now writing a comment to a girl he can be a father to. This is a light dating option and foundation of marriage on the Facebook wall. One girl is laughing out loud. I am telling myself that there is finally someone happy in this crowd of “technologists“, but my thought was interrupted by my photo on her phone which made her laugh. Can I call it mine when someone else has posted it to distance me from the majority? Even if it is, this swallowing saliva is reminding me that it is not the same when the laughing out my character was on the morning menu of technology addicts. I am counting on myself and I do not need strong mathematics, but something much stronger, to realise why I am the main theme of likes, comments, and shares. They are strangers to me, but they also do not know well themselves because they did not even have time. Instagram has long ago formed a filter to increase cerebral convolutions and Facebook has allowed you to connect and network with dangerous fishes from the ocean, unfortunately not a real one, but this one where you do not even have a glass of water to offer to a friend. When I remembered that word friend, it crossed my mind whether friends today think of each other or dig through their thoughts as commenting on someone else’s eyebrows, long or short hair, profession, or knowledge of grammar. I can see that grammar is not disturbing their peace because they are having dangerous wars within themselves that they are not aware of. And they lead me to those towers of ignorance. Prejudice.

Isn’t this world sufficiently developed, but we have to stretch it even more with a rolling pin so that a pie we make from someone’s life turns out as good as possible?

I can not help, but pick up the phone to see who attached my photo. Anonymous faces without a single cheek arrive in my inbox and it says exactly these words: “What did you take to read and write, desecrate books and letters?“ I do not want to answer and prolong the agony.

I think I am neither the first nor the last target of Twitter users and anonymous performers.

Violence can not be described in one story or a novel, we need one big ocean to which lessons will swim in bottles, so when they go to drink it, both sober and drunk remember not to hit anyone in the head, but to make a toast for their life and love they can give, and let them leave their hatred islands behind where they are hard to reach. I am saying that out loud, and all eyes are on me. One of them had already recorded it and posted it on one of those time machines. How many likes and views did he get and also those disgusting comments that try to incorporate the rules of life with their attitude? I am asking him out loud why is he commenting on someone else’s life and what is he getting by posting this video to one of those networks where we are networked, but not connected.

He is still laughing and tries to make fun of me by saying: “Because I can“. And he is 12 years old. What will he say to me when he is 21?

Totally disappointed, with a fallen self-confidence I can not find under the wheels of this bus, I walk away from it and think the same thought. So, if I read a book or create one, I do not belong to this world and I am not in fashion. No, I do not accept it. Even if I die on your post of judgment. I take my book from the bag, continue my sentence in which Ivo says: “There are unreasonable hatreds and envies in some people which are bigger and stronger from everything that other people can create and imagine.“ I will tell you that we still think that we are free, but we are in shackles that are not stopping us from acting because mostly we are doing something wrong. We don’t even know what freedom is until the punishment for it strikes us where it can hurt us the most. We continue at steps that have not been erased because we are all following in the same ones. Let’s be a little different!

Democracy and the rule of law